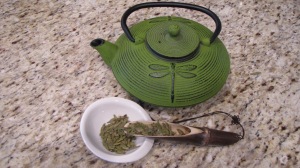 Have you had your Shi Feng Long Jing today?  No, it’s not that, it’s a type of tea, a very famous tea deeply steeped in Chinese history and folklore.  The name translates to ‘Lion Peak Dragon Well’ and its a green tea.  To appreciate the history of this famous tea we have to travel back to ancient China, to Hangzhou, in the Zhejiang Province on the east coast.  This is the region of the Lion Peak (Shi Feng mountains), to the village of Longjing.

Myths about Dragon Well tea go back centuries, and the most famous one is about the Taoist priest living in the area around AD250 who told the villagers they could end the drought by praying to the dragon that lived in a near by well.  When the rains came and the crops were saved the tea growing in the region was called Dragon Well from that time on.  Another old fable is about a villager who was digging a well and unearthed a dragon-shaped stone.  Dragon Well tea became famous when emperor Qian Long, while visiting a temple where monks were growing the tea, claimed 18 of the tea bushes to become Tribute Teas, (teas grown only for the Chinese Emperor and the court).  The tea bushes are still growing at the old Longjing temple today.  The west was introduced to Dragon Well tea when it was served to President Nixon while on a state visit to China in 1972.

The Lion Peak is a region of soaring, majestic mountains and deep valleys with clear streams and vast green forests.  Tea is grown at high altitudes where there is a large difference in day and night temperature, the tea bushes grow slowly allowing the leaves to build up minerals and components thus enhancing the flavour.

Another aspect that makes the tea so famous is its only picked for 6 weeks in the spring, the first 2 weeks around the beginning of April yields the highest grade tea while the other 4 weeks yields the lower grade, the rest of the year the plants are rested.  Shi Feng Long Jing is considered to be the highest quality of the Dragon Well teas and to purchase Dragon Well or any fine Chinese tea visit the Chinese Tea Shop on Pender Street in Vancouver or visit the website at:  http://www.thechineseteashop.com.