All a long I did not think tea grew naturally in Canada but we do have a traditional tea, its called Labrador Tea and it has been consumed by First Nations people for many generations!  I had never heard of this herbal tisane before I attended a traditional tea and weaving demonstration at the new Sto:Lo gift shop here in town.  The Sto:Lo First Nations were the first settlers to the area thousands of years ago and they are known as People of the River, they have a rich and proud tradition that is carried on from generation to generation.  When we arrived at the gift shop I was excited to try the tea, I found it to be nice and mild with just a hint of the essential oils found naturally in the plant. 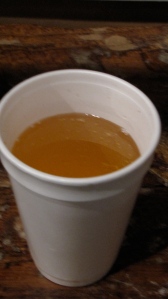 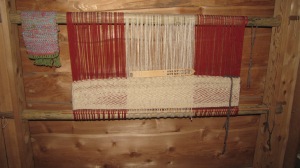 As I sipped my tea I enjoyed watching Frieda demonstrate traditional weaving techniques on an upright loom.  She told me she sells her lovely one-of-a-kind works to people from all over the world.  She said each symbol represents something different so in a way a story call be told through her art.  She made weaving look so easy so I tried and I could see with practice I could get the hang of it…hmmm is there a loom in my future?  After the demonstration and one of Frieda’s delicious home-made cupcakes I toured the gift shop that was built in the fashion of a First Nation’s longhouse.  I could really feel the energy of the Sto-Lo people as I walked through the different the rooms.  After, I had a second serving of the Labrador tea that had been prepared by Nina.  She was kind enough to show me the leaves, they were really interesting as they were very curled on the sides.

The Labrador tea leaves are green and leathery, the underside has distinctly noticeable  fuzz, the plant is from the Heath family.  There are 3 different but related plants used to make Labrador tea and early European explorers encountered them in different regions during voyages to the new world.  The plant can also be found growing in Greenland, (L. greonlandicum).  The primary habitat for the Labrador plant, a small evergreen shrub, is a bog, so it’s also called Bog Tea, it also grows in peatlands, tundra, moist coniferous forests, and muskegs.  During the Canadian fur-trading era, the French Canadian “coureurs-de-bois” used the Labrador plant leaves to extend their supply of black tea, so it is also known as Trapper’s Tea.  Labrador tea is steeped in a deep, rich history and will always be part of the Sto:Lo traditions and Canada!

If you would like to learn more about First Nations people in my area please visit the link: http://www.fraservalleyguide.com/History.html